The Kumbh Mela held at Allahabad is the most auspicious of all the four places. Explore this page to know more about the fair and the city. 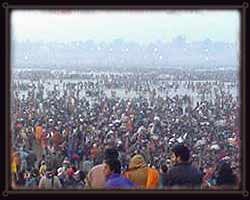 It wouldn’t be wrong to say that it is the city of God as the name itself, Allahabad, in Persian means Settled by God. It for this reason, which has been innumerably mentioned in the ancient Hindu texts, and the the history of the place, both mythological and factual that makes it one of the most fascinating and one among the main holy cities in India, special to the hearts of Hindus in India and abroad. It’s the mythological history according to which, when Lord Brahma was done with creating the world, offered his first sacrifice here. Hence the justification of its ancient name Prayag, meaning Place of Sacrifice. The place also holds a special significance according to the Hindu scriptures for holding the confluence of three of the most sacred rivers of India: Ganga, Yamuna, and Saraswati at Triveni Sangam, which becomes the nucleus of all celebrations of Kumbh Mela.

Celebrations At Allahabad Kumbh Mela
It is believed in the ancient times during an ongoing war between the demons and the demigods for the possession of the elixir of immortality, a few drops fell to earth at four places: Allahabad, Haridwar, Nasik, and Ujjain. And it is at each of the four places that Kumbh Mela, the gathering of millions: devout and common witnesses from all over India and rest of the world, is held and is a sight like no other. Based on astrological calculations it returns to each place after a gap of twelve years, bigger each time.

The story that the drops of nectar of immortality fell near Sangam is believed by the people to have given mystical powers to the place as millions gather at the ghats to purge themselves of all sins by taking a dip in the waters and attain Moksha (Salvation). Young and old, fit and frail; all regions, castes, and creed aside, it becomes the single most brilliantly unifying experience ever. The place itself, overrun by Naga Sadhus, who never wear any clothes and are always smeared in ash; Urdhwavahurs, non-indulgent in physical pleasures; Parivajakas, having taken a vow of silence; and Shirshasins, who stand for all 24 hours and meditate, transforms as if from another realm.